Alien: Isolation, and the Importance of Atmosphere in Gaming

Unless you've been living under a rock lately, you may have noticed that Alien: Isolation has finally dropped from darkened halls of Creative Assembly's offices, and has been been absolutely killing it in the reviews department. After only three days of release (As of the 10th of October), this monster of a survival horror has been raking in the rewards, swiping up an admirable 93/100 on PC Gamer, as well as the Editor's Choice award, a 4.5 out of 5 on GamesRadar, and gaining a current stream of 10/10 reviews on Metacritic, although the average currently resides at a solid 8.4. This thing even has a 10/10 rating on Steam right now!
The game, set another fifteen years after the original Alien film, instead follows the daughter of Ellen Ripley, Amanda, as she searches for answers aboard the spaceship Sevastopol. The situation, as with all survival horror games, quickly grows out of hand as your player character must fight for survival against other, equally terrified humans, the bizarre synthetic humans aboard the ship, and, of course, the alien Xenomorph. 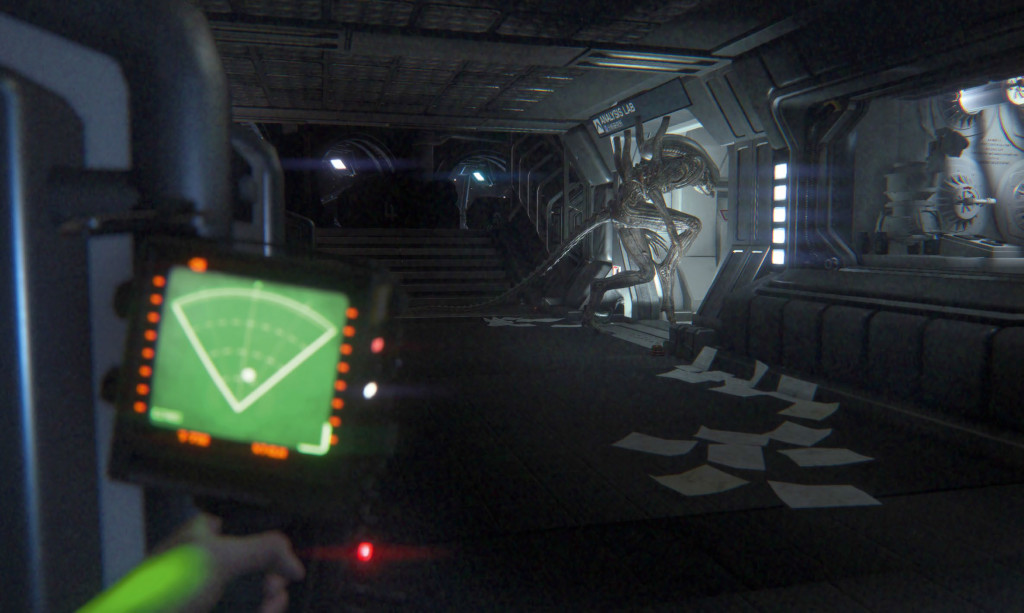 The Alien in this game is an absolute monster. This thing stands eight feet tall, with lethal, serrated claws, jet black skin, and two equally-menacing mouths. The Alien is utterly terrifying in this game, and it will devour every last piece of you if you give it the chance. Even when it's hunched over or lurking around, it's armored form easily hulks over you, and fighting it is not an option. Taking after the likes of the Amnesia series, even if you have a weapon to harm it with, the bullets (which are rather scarce, I might add) from your pistol simply ping off of it's titanic form. The A.I. is well crafted, and can be an absolute nightmare on occasion, learning your every move and strategy to use it against you. I personally got rather fond of hiding in the lockers, until I realized that the Alien was picking up on my patented "hide-and-then-run-away-very-fast" tactic, and feinted a retreat, only to come out from the shadows and drag me, kicking and screaming, to my death, at which point a barbed tail tore it's way through my spine. I was left wide-eyed as I realized that it was learning me. Or, at least, that was the effect.

The true horror of this game, however, comes from the atmosphere and general feel of the game. Every single thing in this game is very well-realized within the world, with bulky, yet oddly high-tech devices scattered around, the remains of life everywhere. Even the bloody motion tracker feels fantastic to use, even if all it seems to do is make the game more terrifying as I notice my imminent doom approaching with every beep on the tracker. Hey, at least it's nice to know where the murder is coming from, right? Seriously though, the sound quality and overall production levels of this game are incredible, and even the sounds of the doors opening and closing are brilliant, if just loud enough to make your paranoia jump up and tell yourself how loud you're being. Atmosphere, and the general creep factor, are some of the most important things in making a game scary, and games such as the now-viral Five Nights At Freddy's have made that clear.

True fear in a game isn't just a jumpscare, some brutal image appearing on the screen as loud music booms in a weird attempt to give the player a heart attack. Real terror is what leads up to the scare, and that's what games like Alien: Isolation and Freddy's completely nail. In Freddy's, the scariest point is when you're staring into a monitor, flicking between screens, until you notice that one of the creatures is missing. After a few moments of frantic and erratic shifting between one screen to another, you can't find a single trace of the fluffy ball of death, and are left wondering where it could be, if not on any of the screens.
Right behind you.
The monster pops up, and screams at you, and you scream back. Game over. But the creep factor truly came from those moments when you couldn't see the beast, not from the time when it screamed your head off. Jumpscares work, but they're very overused in the horror industry as of now, and it's hard to find a horror game without the sudden appearance of a monster, followed by an obligatory "RAWRERREWREWRAR" from the creature at full volume. It's the equivalent of a five-year old in a spooky mask running up to you and screaming "BOO!" in your ear when you aren't looking. Did it scare you? Of course it did! But did it mentally torture you as you thought of what that quite banging sound was, your face pressed hard up against a locker as you peer into the blackness ahead? Nope. Simply put, you need a great atmosphere to have a great scare, and without it, you're just shooting blanks.

Another thing that's important is being immersed in the world, and truly stepping into the shoes of your player character. I'm not telling you to wear a smart suit and go onto a ship with an Alien with a bad case of the munchies, but feeling like your movement and ability is rational and normal is important. Games like Amnesia fall flat when you can clearly see a weapon, only to start there staring at it as you're beaten to a bloody pulp by some eldritch horror. In Alien: Isolation, you do have weapons, and you can feel free to use them, but all they're gonna do is make Mr. Two-Mouths a whole lot angrier. Even if you're firing off at other humans, or synthetics, the weapons you use are very loud, and can attract very unwanted attention from the Xenomorph. You have weapons, but they suck. And Mr. Two-Mouths doesn't even need a weapon to rip you in half.

In short, even if your game has a bunch of surprises and scares, you've got to crack the atmosphere to maximum levels of "OH GOD HELP ME" if you really want a standout entry in the horror genre, and that's just what Alien: Isolation has done. Alien: Isolation is available for the PC, Xbox One, PlayStation 4, as well as the Xbox 360 and PlayStation 3 with downgraded visuals, and I'd highly recommend it to any fan of the Alien series, horror fans, or people who are just looking for a fresh, and terrifying journey to experience for themselves. Best of luck to you aboard the Sevastopol with that thing tailing you, yeesh.