HuniePop - A Step Up for Dating Sims

Recent years have been good to indie games, with recent releases like Transistor, Shovel Knight and Freedom Planet becoming more than just diversions from our big-budget entertainment; these games are now commonplace, and many see them as a breath of fresh air in an era of developers who, despite deploying decent products, might be playing things a little too safe. Risk is the key element to an indie game. A smaller development team means a more unified vision, and that means an indie game can take risks.

That brings us to a very niche genre of indie games: Dating simulators. Immediately, some people will groan. Dating sims are often associated with an exaggerated portrayal of perverted young men looking for an easy, vicarious solution to romantic issues. Distaste for this genre of games is not unwarranted, as dating sims go against almost every standard of gaming.

In the mind of this author, most games are based around both escalation and reward. Escalation can come in the form of a growing world (sandbox games), increasing difficulty of levels (platformers), or character growth (RPG). The standard dating sim normally plays scene-by-scene, with little conflict other than the goal of dating (and potentially sleeping with) one or more romantic interests. Reward can be something as simple as beating a level or boss, but more and more games have a player's actions rewarded with in-game money, experience points, items, concept art, and so on. Dating sims, more often than not, do not reward the player with much more than what is expected (bow-chicka-bow-wow), and that is only gained by playing through the scenarios provided, which usually don't require more than a few dozen clicks of the mouse.

There have been two dating sims in recent years that have included both dynamic change and rewards for your troubles, and as such have earned their popularity among gamers who don't often play dating sims. Katawa Shoujo included escalation and reward in its story, in which the player must be cautious in what they say and do, seeing as only one love interest can be pursued, and every single one has a physical disability. Good players are rewarded with a sensitive and heartfelt story, while less successful players will meet a depressing ending. Another dating sim to break the mold is HuniePop, which makes escalation and reward part of its gameplay. The fact that HuniePop even has gameplay is one of the reasons it stands above most dating sims. While it is, at first glance, an average dating sim, it's actually a puzzle game, not unlike  Bejeweled and (Blargh) Candy Crush. In the game's dating portions, the player must fill their date's affection meter by performing matches of three or more of the same tokens. While that alone is simple enough, HuniePop manages to up the ante by cleverly integrating dating sim elements with the puzzle elements. For instance, each token represents a particular trait, and each girl you meet in the game has a most desired and least desired trait, giving the player incentive to match up certain tokens while avoiding others. Further, special tokens will earn the player sentiment points, which can be used as currency to give the girl a present. Every present gives the player a different perk, which can make the puzzle easier, making a successful date more likely.

What gives HuniePop an edge is that the player has to make a genuine effort to succeed. Between dates, the player is encouraged to get to know each girl on an individual level, learning about their daily lives, their goals, their occupations, and their personalities. These girls aren't cliched archetypes, either. While they aren't overly complex, HuniePop's roster of girls are three dimensional, some with surprisingly subtle traits that are fun to analyze (most of them, anyway). It's important for the player to pay attention, as they will be regularly quizzed for facts on each girl. If the player does well, they are rewarded with experience points called Hunie, which can be spent on upgrades for the puzzle segments. 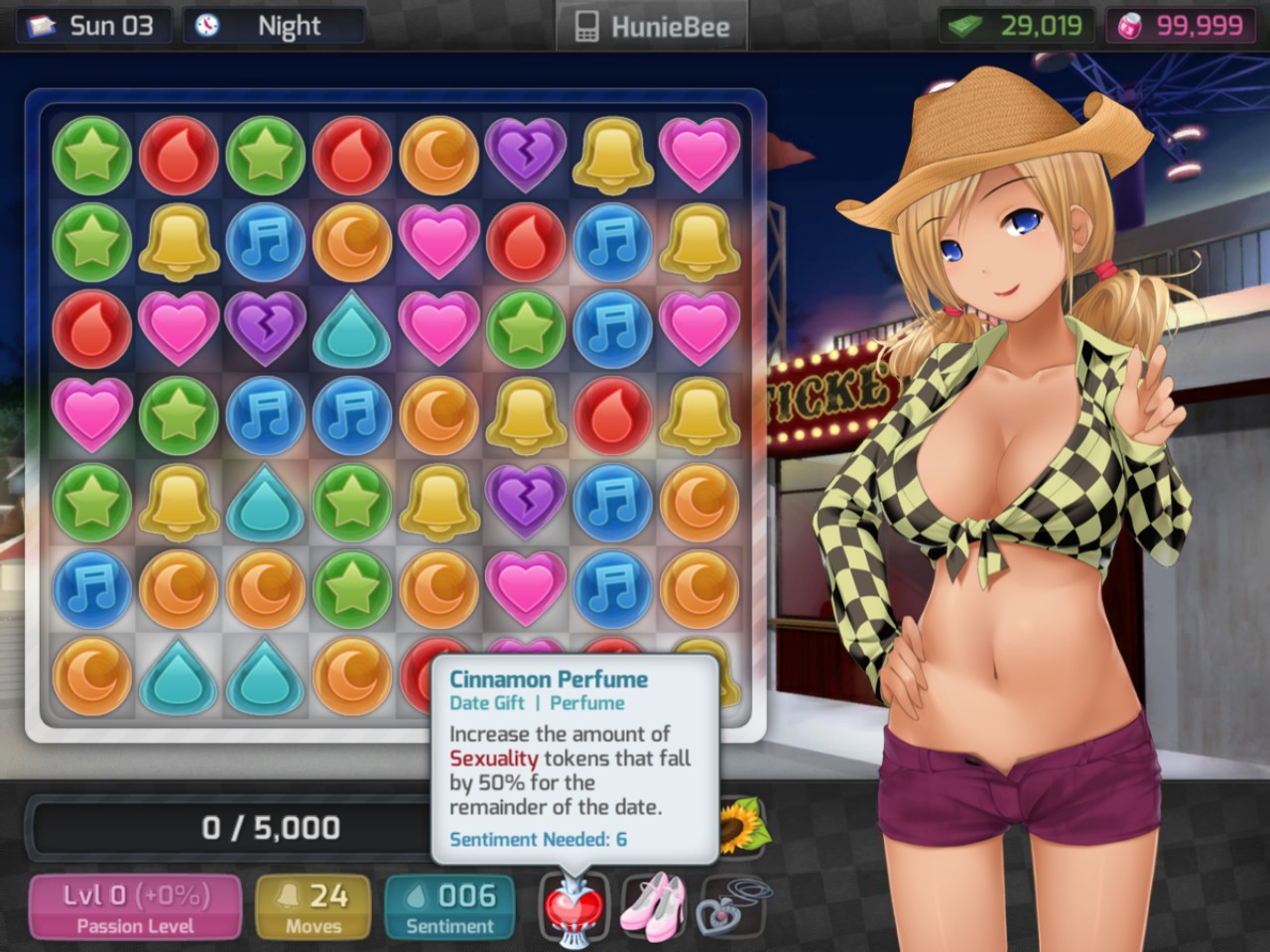 It's a continuous cycle. The player must upgrade themselves to do better on dates, which become harder as the game goes along. Doing well on dates gets the player a higher money reward (ironically), which allows the player to buy food and drinks for the girl between dates. A well-fed girl can have more conversations with the player, and drinks can be used to earn extra Hunie, as well as a sentiment bonus during dates. The player has to summon their inner strategist to ensure they do well in HuniePop, and in doing so are rewarded with the necessary assets to do well in later gameplay. The ultimate reward for succeeding in repeated dates with a girl is, well... Let's just say it's a bonus round, and even those segments provide a reward. For best results, play the non-Steam version.

HuniePop is a winner because it takes risks with the dating simulator formula, without abandoning the qualities that dating sim fans love. It strikes a fine balance between fun puzzle gameplay and the thrill of getting to live out a romantic fantasy. Combining a form of escapism with gameplay that challenges the mind has earned HuniePop overwhelmingly positive reviews on Steam. As such, even if either puzzles or dating sims don't appeal to you, you should at least give this one a try. It's an example that many dating sims should follow.

Oh, and in case you're curious, my favorite girls in HuniePop are Beli, Nikki, and Lola.
HuniePop Anime Girls Dating Sim