Life is Strange is an episodic decision based game similar to the likes of Telltale's The Walking Dead. 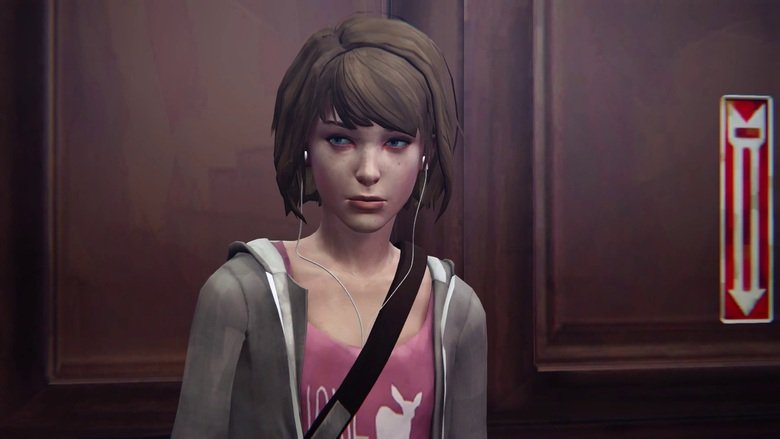 In Life is Strange you play as Max Caulfield. A socially awkward girl that has a passion for photography. While in her photography class, Max discovers that she has the ability to rewind time. but only so far. Max is the definition of socially awkward and is constantly shit on by other people who go to her school; which brings me to the first problem of the game.

Everybody is either a bully or a socially awkward victim. There is no in between apparently except for Max's friend Chloe who is introduced later on in the episode. 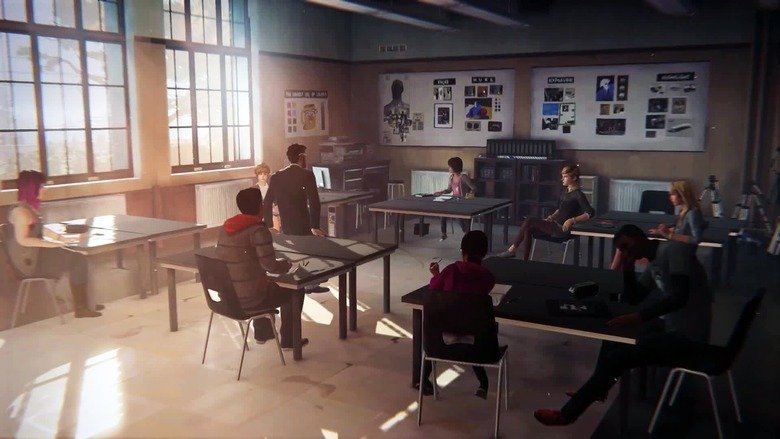 It's blatantly apparent that the developers have no idea what real schools in this day in age are like. It genuinely feels like tumblr's idea of high school is. And unfortunately, that's what this game feels like. Tumblr: The Video Game.

Now, you could chalk this all up into "Maybe it's only this one school that is like this." Well if that were the case I wouldn't have a problem with it, but the dialogue is written so poorly that all the bullies' dialogue might as well have been written like "You're dead meat. I'm gonna pound you." And on top of that, the acting is just as poorly executed with the exception of one character. All the dialogue is acted out in such a stale manner. Like all the voice actors wanted to go home or something. Lip syncing is just as bad. Not one piece of dialogue matched up with any of the character's lips. 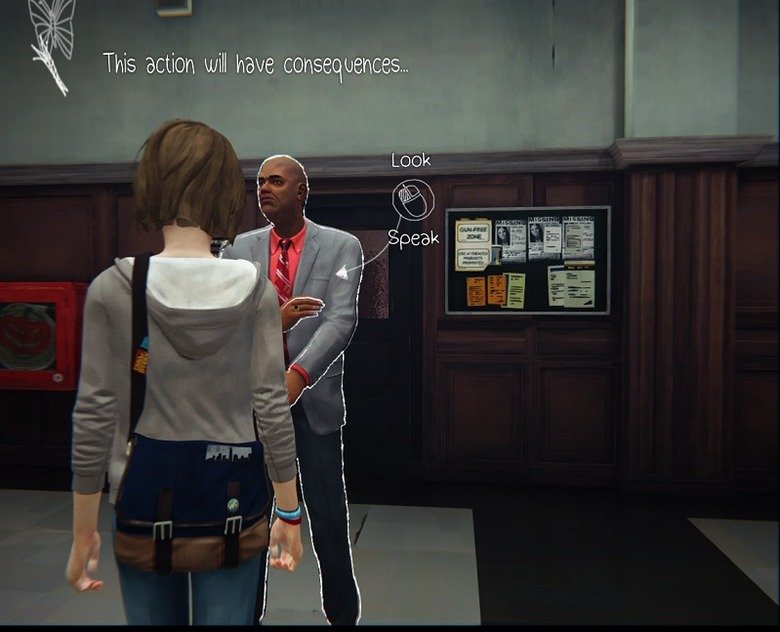 Just like in Telltale's TWD, Life is Strange, contains an actions and consequences element that happens through actions and dialogue. In addition to this, Max's rewind ability lets her change a decision she made on the spot. Saving you from a second play through. I actually like this because, more often or not, you're going to fuck up a timed event and with this you can save yourself the frustration of loading a previous save.
One problem I have with this actions and consequences system implemented is that so seem comical. Like, in one part of the episode, if you water a plant in your room you will get the notification that "Your action will have consequences." What's the worst that will happen? The plant hunts down and kills your mom for not watering it properly? 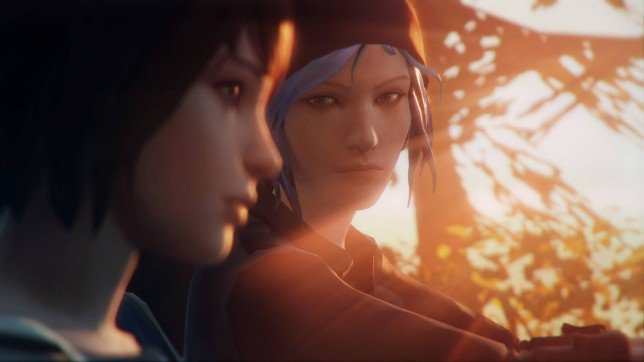 The graphics confuse me. Scenes like this one in the picture can look pretty pretty (?), but I still can't tell if the devs are going for a stylized approach like TWD or if they are trying to be realistic. It's like the developers stopped half way through making the decision and said "Fuck it. Just do both." 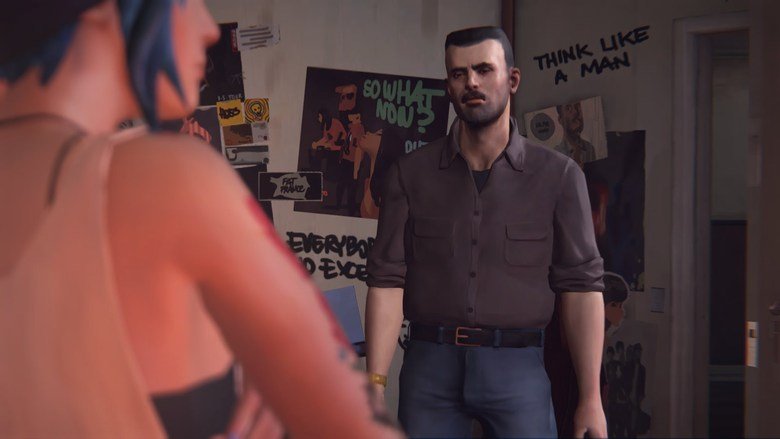 One thing I'd like to add that really bothered me (but probably wont bother you) is Chloe's step dad, David. Obviously this dude is going to be a huge antagonist further down the line and he's just a huge asshole the entire episode. Bulling people on campus and the lot. But it's his background and the way he's portrayed that bothers me.
David was in the military and is a huge asshole. Which I don't mind, but it's the way that his and Chloe's dialogue is written that bothers me. "I was in the military." "He was in the military." "You're paranoid." "War does that to you." It's like the developers are trying to imply really negative things about the military. And they just keep going on and on about how he was in the military and he's an asshole. But that's just me. So if that doesn't bother you, then more power to you. 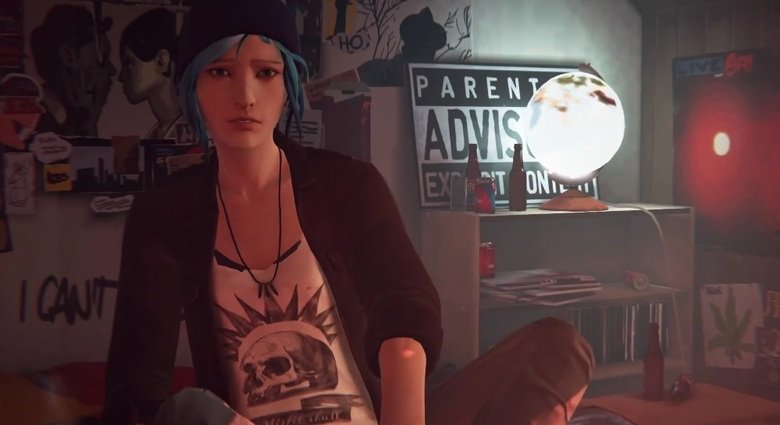 Before I wrap up this review I'd like to talk about Max's friend; Delsin Rowe... I mean Chloe. Chloe's voice actress sounds like the only one in the entire episode actually trying. You can tell that she has some pretty intense demons under her tough punk exterior. She's genuinely interesting and I want to know more about her and her missing friend Rachel Amber.
Why the fuck aren't we playing a game about her?? Max is so stale and boring. It would be a lot more interesting to see Chloe change into the rebellious punk she is in Life is Strange. But that's just me. 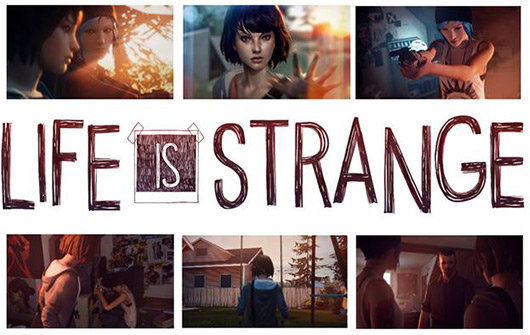 I tried so hard to like this game. I really did. I brushed aside all the preconceived notions I had about it before playing and tried to get invested, but in the end I just couldn't. To me: the only one redeeming factor in this game is Chloe's character. I'm probably going to buy the rest of the episodes when they come out just to find out what happens to her.
Overall, it's lackluster to say the least. I was hoping for a deep story which game like from the likes of Telltale, but what I got was Gone Home meets The Walking Dead. Sound on paper, but was executed poorly. I wasn't going to recommend this, but given that it's only $5. So if you have the extra cash and have already bought every Telltale game; you should try it. Maybe you will get engrossed in it. Unfortunately, I didn't.
And if you want a numerical score: 6/ 10

*This review is written improperly because I originally posted it on FunnyJunk. The reason that I basically copied and pasted it from their is because I'm really proud of this piece. I've never had anyone else read my writings so constructive criticism is much appreciated so my writing will improve in future articles. I hope you have a wonderful day.

10 Reasons Why You Should Buy a Wii U